I like to say ‘Gozo is always a good idea’ and with my incessant trips to the beach, it has got me thinking of those warm times I had in the northern hemisphere not so long ago, too.

You’re all probably scratching your heads wondering where on earth is this ‘Gozo’ that I’m talking about. Well, my dearest Malta is not just a singular tiny island country, but a small archipelago of tiny islands, Gozo being one of them. It’s the second largest island and a twenty minute ferry trip across the stunning Mediterranean water from Malta.

One perfectly sunny day we got up bright and early  (I’m actually not a morning person at all, so not ‘bright’ as such) and zoomed up to the ferry terminal. We waited, then chugged our car into the belly of the ferry, hopped out and whisked upstairs to watch the world pass by. 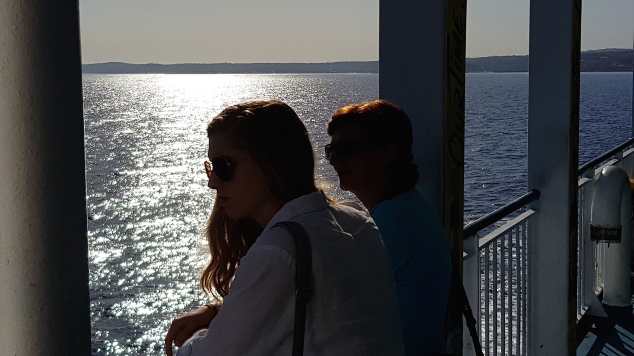 Arriving, we headed straight to the Cittadella, in Victoria, to look around and take in the view. It’s incredible to think this sight has been inhabited since the Stone Age! And some of the buildings and ruins date back to the Medieval Ages. 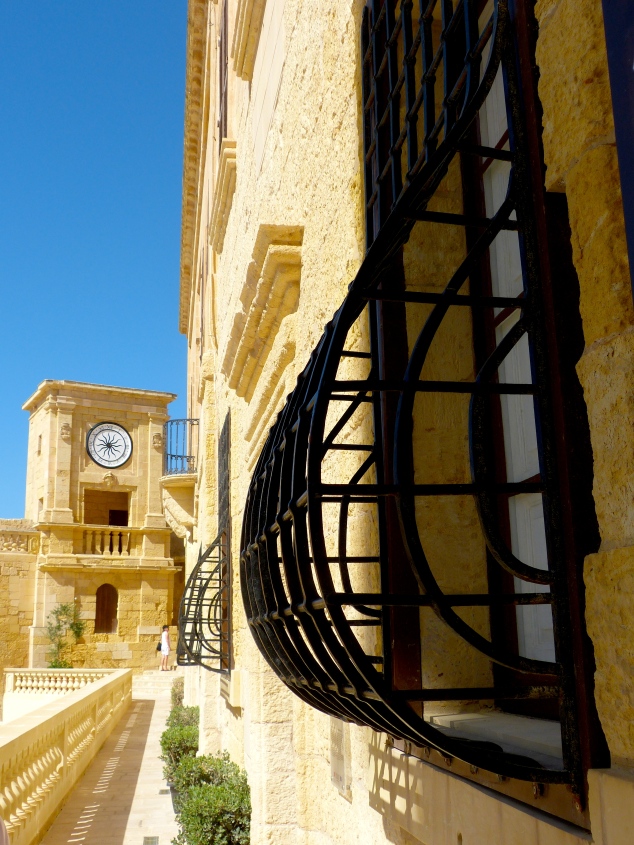 The Maltese islands are ancient, along with its history and there’s a sacredness that comes with that. Unlike in Australia, or other new countries, where we demolish to always build ‘new’, they hold onto the past, for tradition, heritage and a reminder to learn from the past. The Maltese are very connected to their history. What happened a centuries ago is still something that they consider identifies them today. History is always repeated people! It’s good to remember that.

Make sure to wander the streets, say hello to the stray, but well-loved cats and check out the fabulous view at the top. 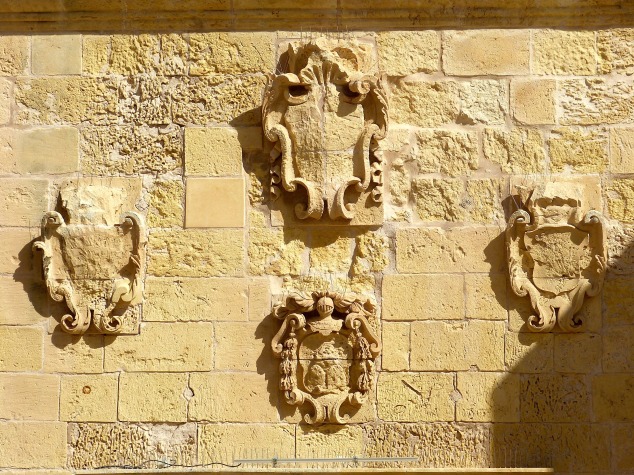 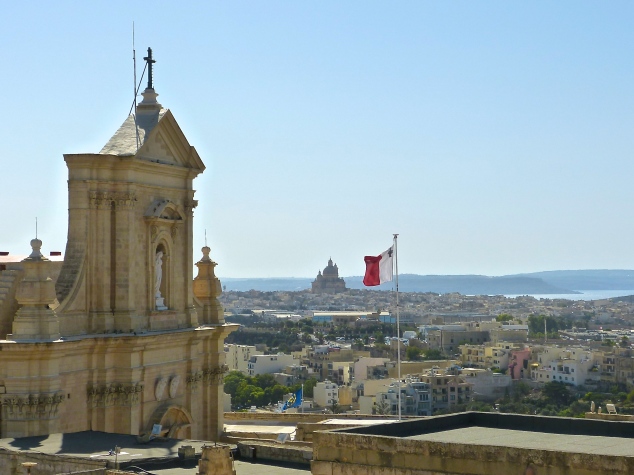 Next, we  moved onto the beautiful iconic church of Ta’ Pinu, the national shrine of the Blessed Virgin Mary of Ta’ Pinu. 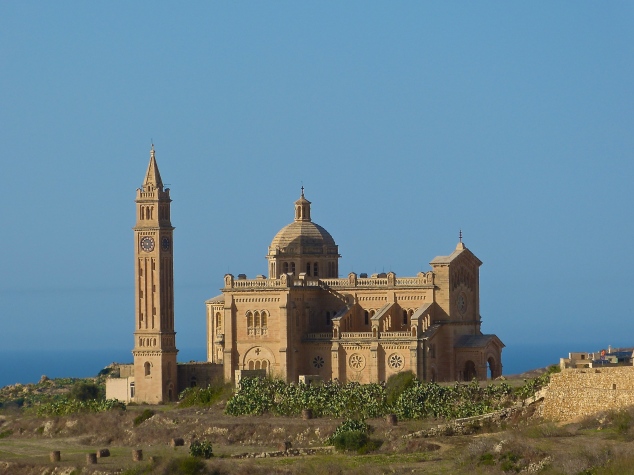 Saint Pope John Paul II and Pope Benedict XVI have both visited here over the years and many miracles have been attributed to the devotion here, with rooms full of touching stories, crutches, medical items and gifts of thanks hung on the wall.

Whether you’re religious or not, it’s a beautiful piece of architecture all the same. Well worth a visit!

Back in the car, the beach was calling and we made our way down to the salt pans of Qbajjar. (Best to Google Maltese pronunciation. It’s not what it seems, trust me!)

Here, you’ll find the chatty old fellow, who loves to share how he continues to traditionally harvest the salt by hand. 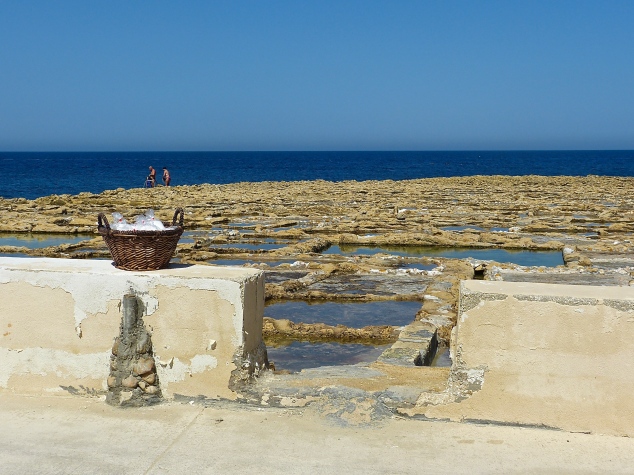 He sits in his little limestone cave out of the sun and you can go buy his fresh salt right from him. 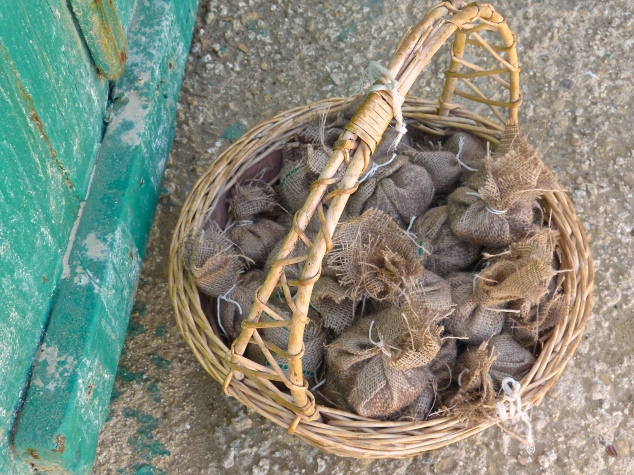 Next, it was definitely time for a swim. We jumped right in off the rock at Marsalforn and it was divine. The water in the Maltese islands is crystal clear, deep and incredible shades of blue and green.

Dried off, we headed to the other side of the island to another very famous and beautiful spot – neighbouring where the Azure Window used to stand.

If you don’t already know, the Azure Window was an enormous natural arch that stood out from a cliff over the sea. Completely gone, all that now remains is some rubble submersed in the deep water below.

But just a walk away is another wonderful attraction, Dwejra Inland Sea.

It’s a very unique and beautiful inlet of water. The sole access to the open ocean is through the dark and ominous tunnel you see in the photo above.

There’s a ramp right into the water, a stone-lined shore, boats bopping around and the locals’ seaside boat sheds, adding colour to the environment. 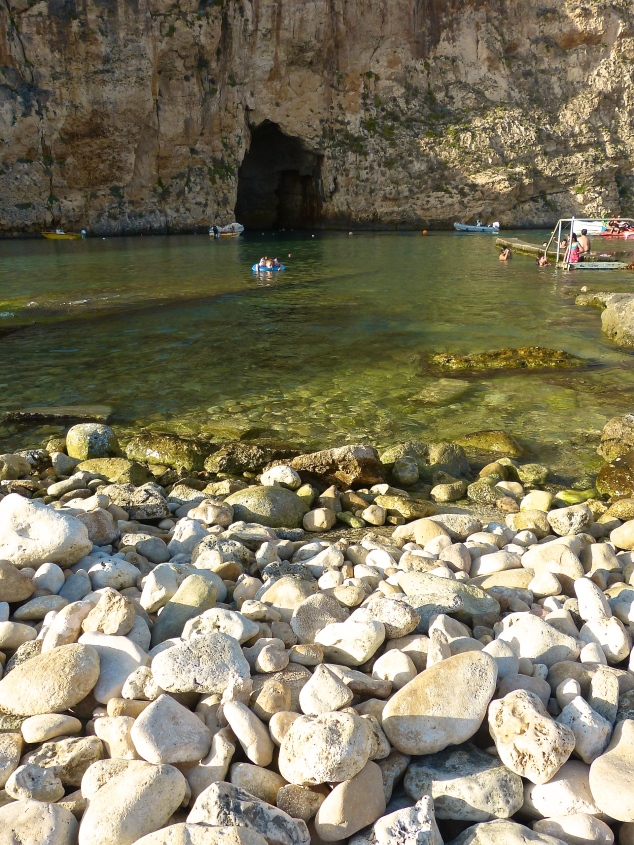 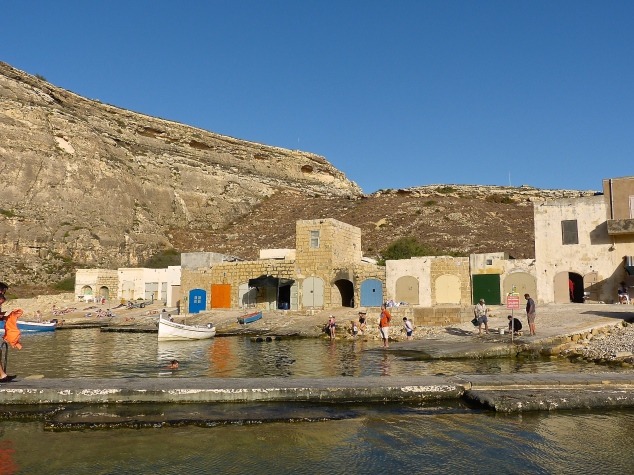 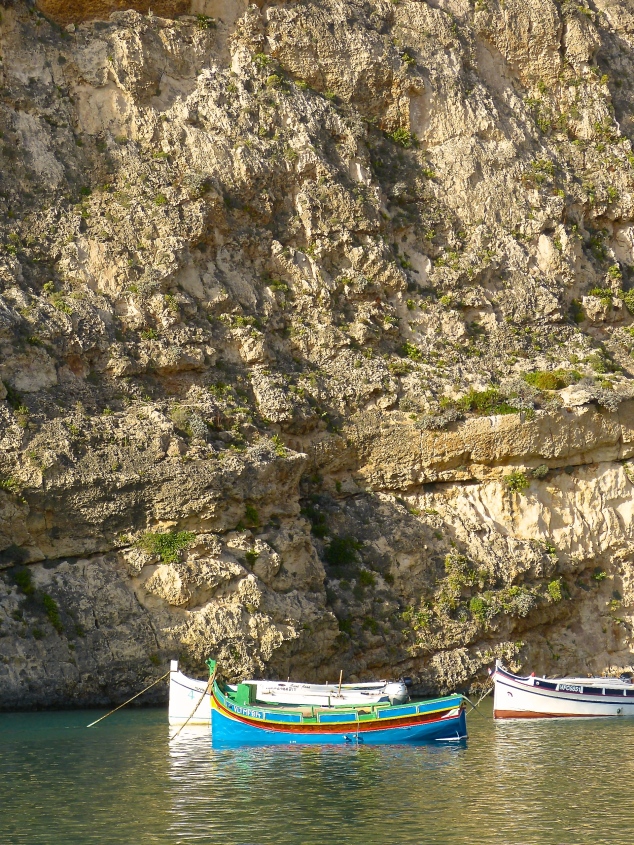 This colourful ‘dghajsa’ (boat) is known as a luzzu and is one of the many traditional boats you will see around the islands. 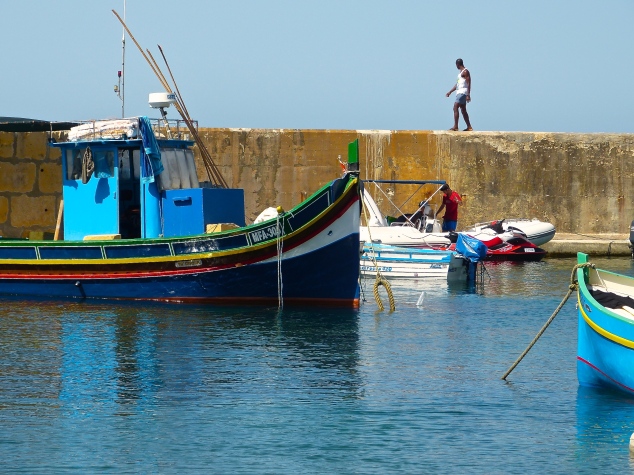 There’s always a set of eyes at the front of a luzzu, and superstition has it that it’s meant to keep evil spirits away!

Back on point … we jumped in for a swim. 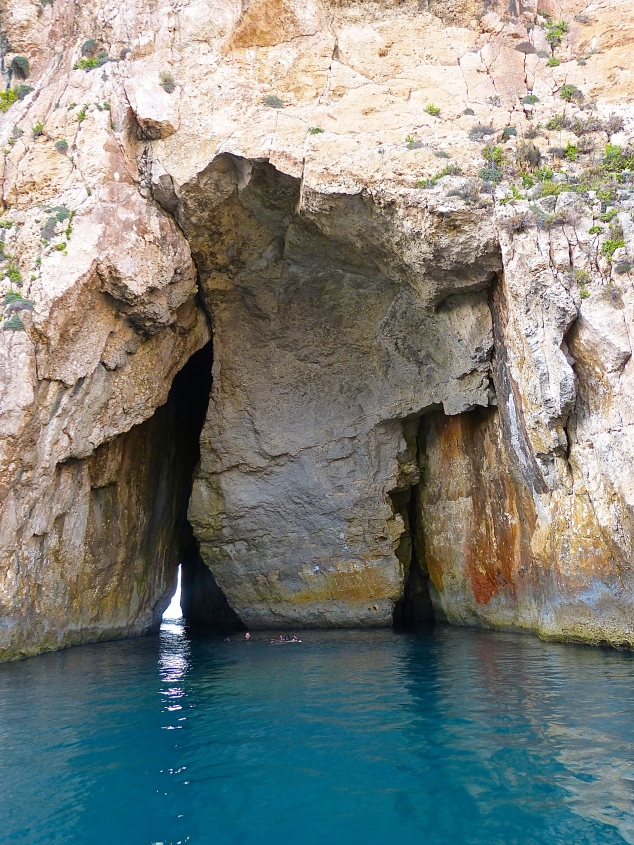 Papa Bear swam right into the depths of the tunnel, while I braved swimming only into the entrance. I wish I had an underwater camera here, because it is so difficult to describe just how deep the water is for a regular Maltese ‘swimming hole’. Entire enormous boulders, fallen from above, lay below me. I was swimming over them with many feet beneath me still to spare.

You never know when rocks may decide to fall, so I didn’t dawdle too long in there.

Out of the water, we decided to drip dry and go for a 15 minute boat trip. Only 5 euros per person, I can definitely say it is totally worth it, especially at sunset. 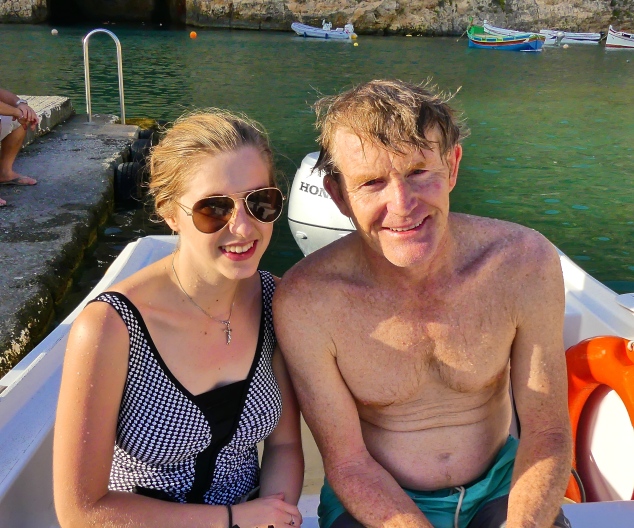 Just find one of the many available boats and their drivers and take a tour through the tunnel to get a look at the other side! 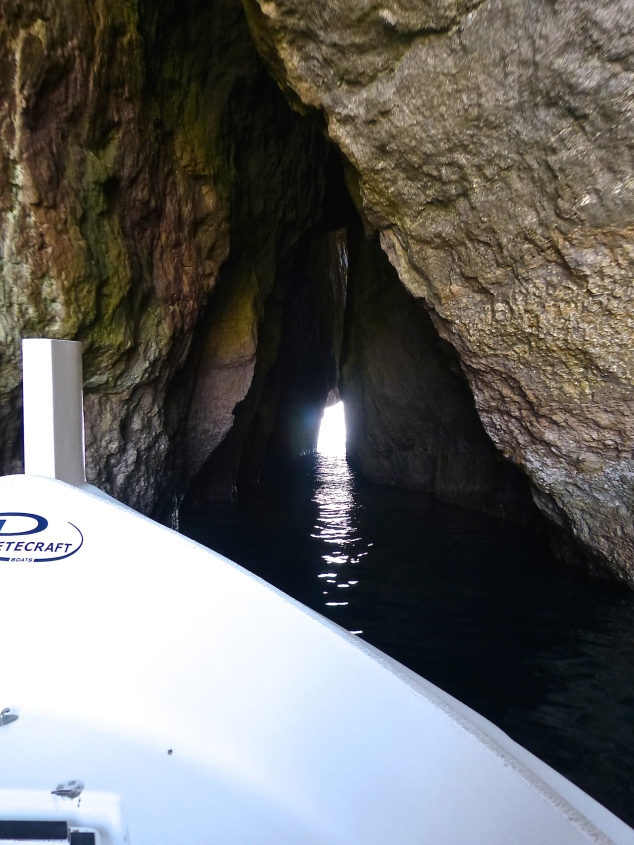 It’s very echo-y  and above is dark, high and cavernous, like a natural craggy cathedral ceiling.

You’ll come across swimmers tucked away in stony niches, trying to avoid the oncoming boats, as well. 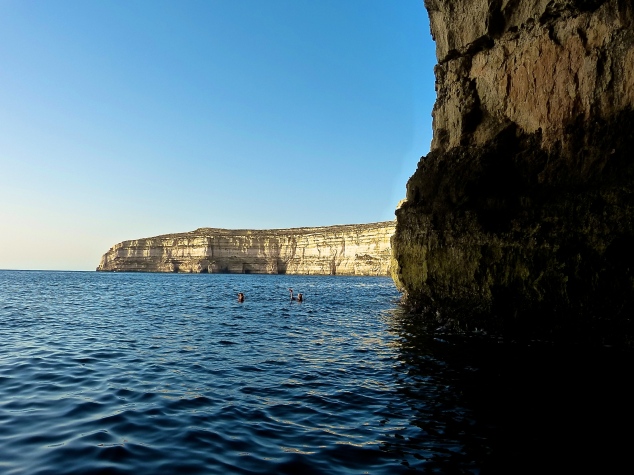 And on the other side, behold the great cliffs of the Maltese islands. 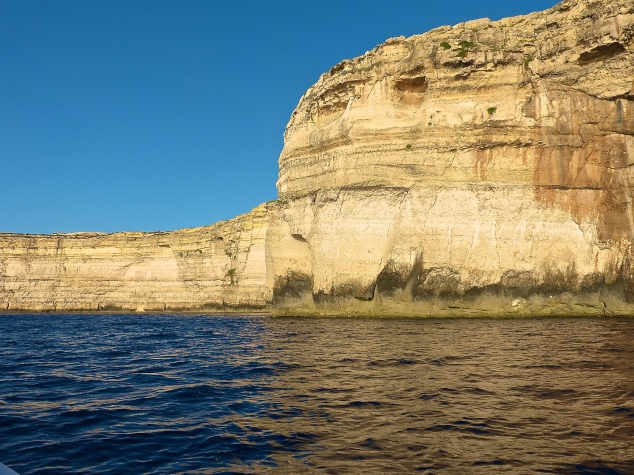 Not quite the same as what it used to be right? (Stolen Google image below.)

I’m so glad I got to see it years ago, before is disappeared.

It was assumed that the iconic arch would first collapse from the centre of the arch itself, as it was thinning and hazardous, but little did anyone suspect that it would collapse from the bottom of the pillar, below the water line, leaving the entire thing crumbling down. The whole affair took a matter of seconds!

Next, we were taken into a cave.

Here, the water is deep and so incredibly beautiful.

It didn’t seem natural and yet it was! 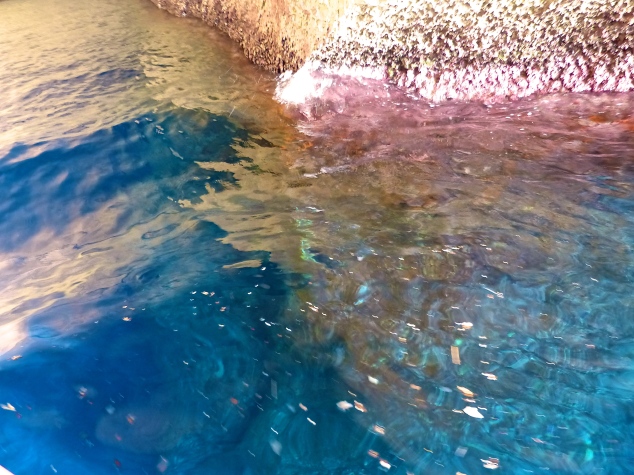 Soon, sadly, our little trip had to come to an end.

We were taken back through the tunnel, but I would have more than gladly seen the sunset out from our little boat.

Showered and changed at the car park, we made our way to Xlendi Bay for the sunset and some dinner.

We walked around the bay and got a glimpse of the cliffs before dark. 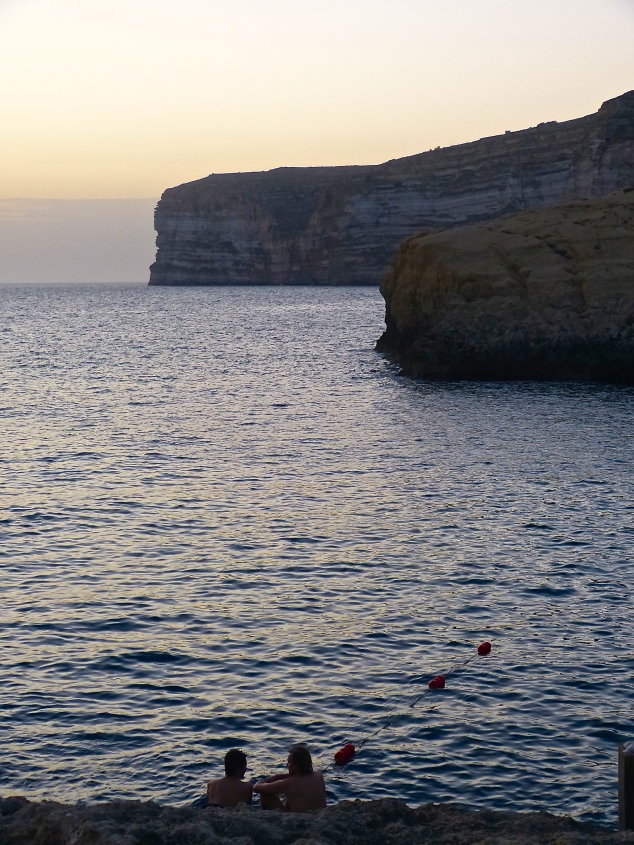 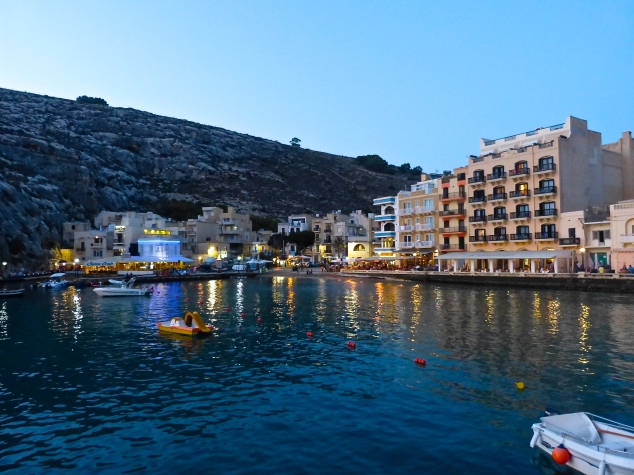 As the sunlight dimmed away, the lights began to sparkle more and more. All the way up the hill, candles were lit for the up-coming festa. It was like a fairy world, incredibly special and romantic.

Before we headed off to eat, we watched as some boys, fooling around, tried to tackle ‘il Gostra’ – the greasy pole. During the annual church festivities, a special competition is held, where people try to reach the tip of the greased up pole and grab a flag at the end. It’s a big deal and the winner gets a mention in the Maltese news.

More often than not, they all come splashing down, so while I’d hate to do it, it’s highly entertaining to watch!

With our day coming to a close, we ate dinner at one of the string of restaurants along the waterfront at Zafiro, which had nice service, music for entertainment and most importantly, a bountiful amount of good food, because as my Maltese Mamma says, ‘you’ll never go hungry eating out in Malta!’ (Maltese know how to feed you!)

With our bellies full, we bid beautiful Gozo farewell and caught the late ferry back to Malta. Trust me, after all that food, sun and swimming, we slept very soundly in our beds that night!